We want you to be completely happy with your  purchase. You have 30 days  to make sure it is perfect. If something’s not right, we can help. Our Fit Experts are available via email to answer any questions you might have. Our Returns & Exchanges makes it easy for you to locate your order and easily swap out the size and/or style. Not applicable on Try Before You Buy orders.

High Impact Sports Bra. I recommend sizing up both cup size and waist. Very sturdy and supportive. Im a 38 DDD. I bought a 38 E. Holds me super tight. Has a hook mid breast to assist with zipper closure. 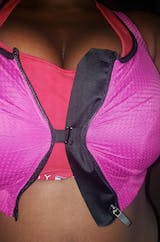 A
Amazon Customer
Me encanto

A
Andrea3433
Not supportive enough for running

I first bought this in my normal band size and one cup larger after much dilemma. (I was fitted for a running bra at a running store months ago and they said I really was the larger cup size but could go smaller and the reviews saying this bra ran small factored into my decision to go a up a cup size). The first bra looked like it fit, but when I jogged in place there was a lot of movement. There was not enough compression for a jog bra. If I need this for a lower impact sport, or as a bra top for yoga or something the one that was one cup larger would be the one I would go for. But, I don't really need a sports bra for anything but running, so I sent the first one back and got the second in my normal size (band and cup). I am keeping the smaller size, but I have to wear a regular bra under it for support. The only compression is in the center where the zipper is. So the "excess" goes to the sides/ under the arms in the smaller size. There is nothing engineered into the bra to compress or contain on the sides besides the fabric. Sports bras work either by compression or molding and this one doesn't have the molding, and the compression only is really working in the center. I don't understand why it is so hard to find a good jog bra. Brooks stopped making my favorite bra.

I like the look of this bra, and it seems to work of a lot of people, so I hesitate to give it 3 stars, but it is not a viable running bra for me without a bra under it.

This bra provides pretty good support but there are different styles in this same brand that are better. I do wear this bra for running and I have minimal back pain (high impact, large bust) I love that it is nursing friendly with the zipper down the middle. I had a hard time finding the right size (returned twice but third time is the charm) 34G and am in a 38E. I like The tighter cup helps with movement.

This is very good quality sports bra. Unfortunately for me though, it was way to small. I ordered my usual size, but it turned out to be a couple sizes to small in the band.